Click on the link to access the most current information and contents. Updates are posted shortly after they are released at 4 and 10 am/pm for the duration of the storm. I will be  tracking and analyzing 2021 Ida as it approaches using some methods I’ve been working on.  The tracks from the NHC have been refined over the years to have very little error.  However, using surface-based data from buoys and airports, it is possible to increase the accuracy of the winds, strength, storm surge and overall ferocity of the storm.  This analysis is still in development and the products created will not be the quality I wish, but they will be refined over time.  Follow this page for updates, and as previously stated, don’t just scroll on FB or other social media. You have to click on the link to access recent information as FB takes a snapshot and only renders that once, missing the current information.

The following information is from Page 28, of the 2019 TPCG Emergency Guide (link) available at the Terrebonne Office of Emergency Preparedness website (link).

The data available from the buoys is telling the strongest winds (sustained:20 knots, gusts:30 knots) are around the mouth of the Mississippi.

According to NHC/NOAA, the most likely path will take the center of circulation right over Houma.  However, with no eye, and the disturbance only generating a broad, loosely-organized rotation, it would be difficult for this storm to pose even a mild threat to Houma.

Further east, there are areas preparing for the possibility of 10 inches of rain an hour. The storm is radically lopsided to the east. Scant clouds appear to the west.

More to come. Thanks for reading.

There aren’t many differences from yesterday to this morning. NOAA is expecting the disturbance to be named on Friday. The pathway is the same: meandering up the coast until it becomes an issue for the northern GoM coast on late Thursday or overnight into Friday. No solid information on intensification forecast. The weak high pressure system is still helping prevent the disturbance from being anything to worry about. But, just stay aware and tuned in to your local forecast outlets.

I think we may be safe for a few more days. 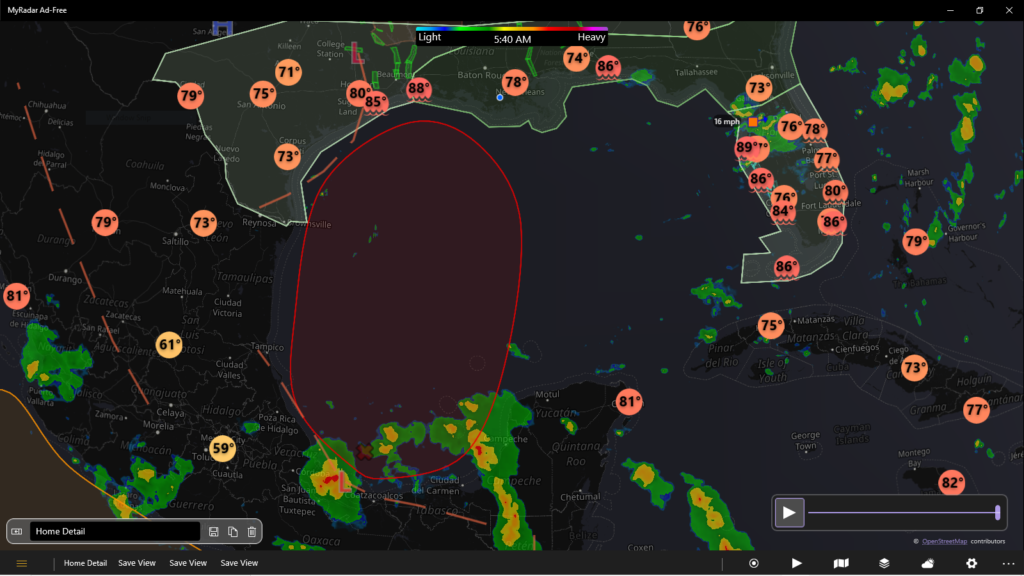 The weather map looks terrible, but things don’t seem to be that bad. For one, there is a weak high pressure system hanging out in the central GoM until “Mid-Week,” according to NOAA. I understand that tomorrow is “hump day” and thus, mid-week. But, if you look at the satellite imagery the central portion of the GoM is clear with all the nasty stuff down by the Yucatan Peninsula.

The NHC is still rating it at a 70% chance of development over the next 5 days, but only 20% chance for the next two days. The data tells me that if there is going to be a storm, it will not develop for at least 3 days. During those three days, it will drift toward the Louisiana/Texas coasts.

Given the temperature of the GoM, I would expect rapid development after day 3 (Thursday). Hopefully, by then, it will be next to a coast, rapidly make landfall, and rapidly dissipate. Where the disturbance is, the proximity to the coast, and the pressure of the center will be the data points to watch and examine closely Thursday, June 17th.

We will likely have a fair amount of rain with this storm. It is hoarding a lot of moisture.

Below it the NHC’s GoM portion of the Atlantic Tropical Discussion from this morning.

A surface trough starts at the coast of Mexico near 22N98W, and
it continues to a 1009 mb low pressure center that is near
20N95W, reaching 18N91W in the Yucatan Peninsula of Mexico.
Precipitation: scattered to numerous strong is within 60 nm on
either side of the line that runs from NW Guatemala, toward the
NNW, for 240 nm. Widely scattered moderate to isolated strong is
elsewhere from 23N southward from 88W westward, in the SW corner
of the Gulf of Mexico. Gradual development of this low pressure
center is possible during the next couple of days, while it
meanders near the coast of Mexico. The low pressure center
should begin to move northward by midweek. It is likely for a
tropical depression to form late in the week, when the low
pressure center moves across the central or northwestern Gulf of
Mexico. Heavy rainfall is possible in parts of Central America,
and in parts of southern Mexico, during the next several days.
It is possible that heavy rains may begin to impact parts of the
northern Gulf of Mexico coast on Friday. Please, consult all
weather bulletins from your local meteorological service for
more information.

An upper level trough is moving through the easternmost part of
the Gulf of Mexico, including on top of Florida. Precipitation:
Scattered moderate to isolated strong is in the Bahamas from 25N
northward. Isolated to widely scattered moderate, and locally
strong, are elsewhere from 20N northward from 70W westward in
the Atlantic Ocean, crossing Florida, and continuing to 92W in
the Gulf of Mexico.

Weak high pressure ridging will remain in the central Gulf of
Mexico into mid-week, supporting mainly gentle to moderate
anticyclonic winds across the basin. Broad low pressure in the
Bay of Campeche should begin to move northward by midweek. It is
likely for a tropical depression to form late in the week, when
the low pressure center moves across the central or northwestern
Gulf of Mexico.

Basically, it’s too early to tell. The consensus is to check back on Wednesday. There is an area of weak high pressure in the central portion of the Gulf preventing rapid development. However, living in SELA, we don’t need rapid development to find ourselves in trouble. My recommendation is not to freak out, but just stay aware of the tropics. If by Wednesday you hear no more of this, then good. If we have development. Then we know what we have to do.

Below is the NHC Discussion and satellite images of the area of concern. 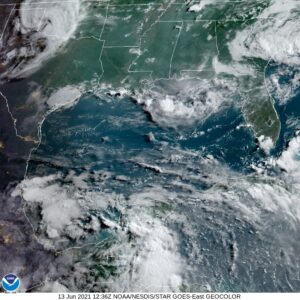 A broad 1008 mb surface low is centered over the Bay of Campeche
near 20N95W. A surface trough extends from 20N97W to the low to
18N92W. Scattered moderate and isolated strong convection is noted
from 18N to 23N between 94W and 98W. A 1015 mb high center is
analyzed near 26N90W with a ridge axis extending to the central
Texas coast and through the Straits of Florida. A complex of
scattered thunderstorms has moved from the lower Mississippi
Valley into the N central Gulf north of 27N between 85W and 90W.
Moderate anticyclonic winds are noted south of 23N and north of
27N, with light to gentle anticyclonic winds elsewhere. Seas are
3 ft or less across the basin, except higher in and near any
convection.

For the forecast, weak high pressure ridging will remain over the
central Gulf of Mexico through the early part of the week
supporting mainly gentle to moderate anticyclonic winds across the
basin. A trough of low pressure that has formed over the Bay of
Campeche. Slow development is possible over the next several days
while the broad disturbance moves little, and a tropical
depression could form in this area by Thu or Fri. Regardless of
development, heavy rainfall will be possible over portions of
southern Mexico during the next several days. Please consult
products from your local meteorological service for more
information.